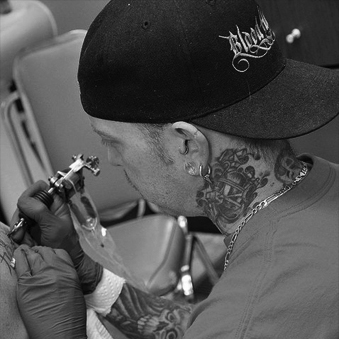 Greg Drake tattoo artist and owner of Local Tattoo and Laser Co., in Lansing, Michigan, uses the title of his shop, “Local Tattoo and Laser Co.” to pay homage to his home town. Greg was born and raised in Lansing, MI and has not only made a respectable name for himself among his home town and community, but has also achieved this among the national professional tattoo circuit as well.

Greg is a 20 year veteran of the tattoo scene, a 15 year veteran of the professional circuit, and a 22 year collector. A self-taught oil painter, Greg was apprenticed by Dennis and Debbie Baker, original artists and owners of Splash of Color in East Lansing, Michigan. Splash of Color opened in 1986 and Greg began his apprenticeship there in 1991. After Dennis sold Splash of Color to Kris LaChance in 1997, Greg was allowed to continue working there until 2001 where he began working at a second shop owned by Jay Morton called Magnum located in Grand Rapids, Michigan. While working at both tattoo shops, Greg began taking art classes at GRCC from 2001 to 2003 where he studied charcoal life drawing. Greg worked at both Magnum and Splash of Color for two years until going back to work exclusively at Splash of Color until 2010. With an impressive resume, a name for himself, and the education and experience to back it up Greg opened Local Tattoo and Laser Co. in 2010 with his wife Monica Drake.

Greg continues to work diligently at his shop and on the road in the professional circuit. He is versatile in any style including, but not limited to: photo realism, portraits, Polynesian tribal, Japanese, flash, and traditional. Greg is always willing to do what his customers want, and in the clean and comfortable setting of the shop he owns, in the city he calls home.

Greg would like to thank the following people: Dennis and Debbie Baker, for apprenticing him, and beginning his career, Kris LaChance, for allowing him to continue working at Splash of Color after he became the new owner.